"CryptoBlockCell Technology" is the newest “proof-of-concept” Blockchain principles derived-type technology to be adopted for raising funds for "Dimana$U$ Prophecy" Project in order to demonstrate its merit and high efficacy.

programs, as one “Reward and Perk-Incentives Treatment Program”, to allow anyone interested to contribute to the Project in exchange of being awarded with DPP-Coins Crypto-assets such as DPP-Coins eCheck, which may be exchanged, against initial contribution-as-donation properly “fulfilled and taken care of”, for –

CryptoBlockCell Technology, based on employing blockchain technology basic principles, is to be secure technology-as-a-service  perfectly capable for managing crypto-assets transactions under the terms of so-called “Clever Agreement”.
The term “Clever Agreement” defines a digital agreement that is not written in a specific programming language but presented in cryptographic form to be executed by both “DPP-Coins Discounter System” and “DPP-Coins Fluctuations Bond Acquire-Currency System” to issue certain rewards and/or certain percentage of equity based on the amount donated.

The cryptographic form of DPP-Coins eCheck  is very convenient when it comes to managing rewards based and equity-based funds-raising campaigns.  The raised funds are to be used for perspective developing DPP-Platform emitting PEG-Token and COIL-Token crypto-tokens distributed as a gift. 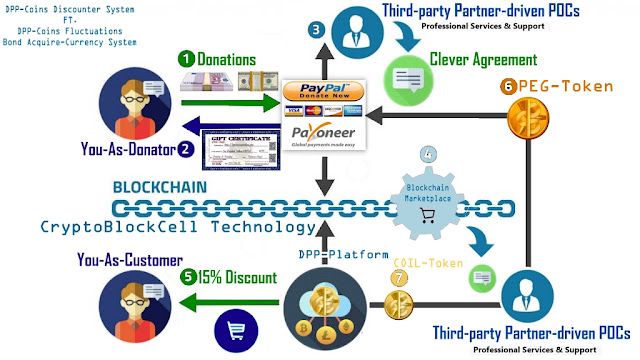 Besides of its optimal traits such as scalability, privacy and decentralization, CryptoBlockCell-Tech allows beneficially featuring its simplicity along with elegance of PEG-concept plus easy COIL-integration points for partnering and affiliating, and an ability of exchanging for DPP-Coins type-derived  crypto-currency.

(a)  stability by backing itself with system-internal-usage token, called PEG-token; 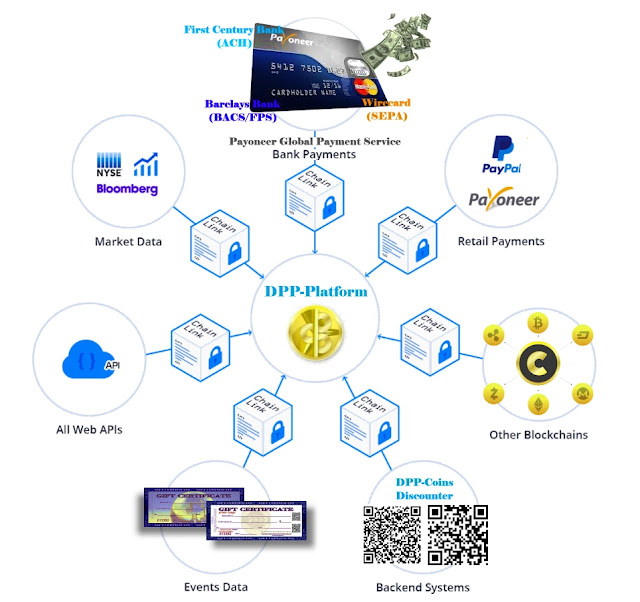 The quasi-stability of DPP-Coins, as it was planned since very beginning to be initially generated as a Token at Waves Platform in its beta-version, now is conditioned on PEG-token and COIL-token released capability to monetize any given IP-assets-based projects by means of crypto-asstes exchange transaction.

Completed transactions are maintained going back to the DPP-System and then distributed back to the DPP-Coins holders rewarded for maintaining the system that backs itself.

The “market-value-backed” feature of DPP-Coins is based on implementation and employment of both “Discounter System” and “Intellectual Property Registry” decentralized autonomous organization that is a primary category that best represents VDA PRODUCTION core-service.


DPP-Coins initial release-conversion rate equals $1 USD. DPP-Coins crypto-assets valued in US-dollar are not represented by any monetary and credit system, and is only a promissory note of gift-exchanging potential.

Generated at Waves Platform in its beta-version the name for “DPP-Coins” has been taken for re-issuable Token with a number of decimals signs defined as "8" to serve as a payroll tool utilized for VDA PRODUCTION COLLABORATORS VPN-based networking of freelance-service providers assisting in “Dimana$US Prophecy” Project implementation.

“Dimana$U$ Prophecy” Project (aka “the Project”) is to be governed by Project Advisory Board of United Lancers-under-Membership or else called “Project Participants Advisory Board” that is comprised of private and legal persons from all over the world who are committed to the market and technical success of the Project including its spin-off-sub-projects.

within the Project, with both working closely together to ensure the overall priorities and objectives of each spin-off sub- project are properly aligned.

The members of the Advisory Board may –

(1)                  propose and vote upon changes and additions to the Project test and validation infrastructure; and vote on requests to allocate financial resources to each spin-off sub-projects,

(2)            gain valuable strategic insight into project plans and future scope as well as the multi-year strategic direction of the project, and help protect the durability of their investments in  Project.

(3)            have regular opportunities for discussions with technical leaders within the  Project,

(4)            have the opportunity to share technical and marketing priorities, and endorse new strategies for the project,

(5)            have the option to participate in press releases, include logos on banners, websites, and events, and influence the  Project marketing strategy,

(7)             define policies, including trademark usage and approvals, compliance and certification of  derivatives, and branding and style guidelines,

(10)       contribute a sustainable, self-directed source of funding for work that will help drive the marketplace and technical success of the  Project.

“Independent Role-Initiated Scholarship” (aka IRIS) is the Independent Role-Playing Creative Learning approach based on employing a set of Agile-Prop principles and methods of the alternative learning linked to playing the franchising project-topic-related role targeting to the most fastest and effective scoring of necessary skills needed for project -objectives commercialization, capitalization and monetization.

•        Global policy decision-making and problem-solving, including trademarks, compliance requirements, and test cases and infrastructure.
•        Membership-based requirements for each Project Participant.
•        Steer the project to advance its market and technical success by raising awareness and garnering broader industry support for “Dimana$U$ Prophecy” Project through individual and VDA PRODUCTION COLLABORATORS/ efforts.
•        Budget management oversight and prospective-investment decisions on infrastructure and project operations via DPP-Platform.

The Project is in the process of creating a new common-test infrastructure of web-resources integrated in DPP-Platform and employing new test-cases for specific hardware and software, and mobile and web-based applications in combination that leads to higher quality spin-off sub-projects releases. The Project Participants Advisory Board will be responsible for defining test-cases and prioritizing release requirements, in cooperation with VDA PRODUCTION COLLABORATORS to insight and input into project planning

IN PROJECT WE TRUST:
BELIEVING IN WHAT YOU GAIN


If you are interested in gaining FREE “Premium User Subscription” for consuming selective future-distributed products with a usage of attendant/orchestrated services available with great discounts (in special cases even free of charge) please, send us an e-mail message indicating your particular interest in becoming the user of DPP-platform and consuming any-chosen product and service mentioned herein.