“Human Life & Human Community &Human Exploration” topics and issues which are planned to be reflected, in harmony with a plot to a certain extent, in the audiovisual products, subject to “Dimana$U$ Prophecy” Project and its spin-off sub-projects: 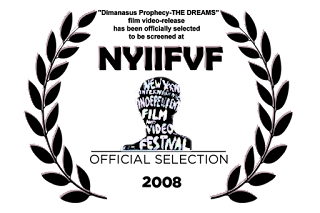 Debuting in September 2008 with “Dimanasus Prophecy: THE DREAMS” experimental documentary and in July 2010 with  “FREE-DOM” anaglyph art-works festival that has been focused on presenting authorial "3D quasi-anaglyph" technologies and promoting authorial "glasses-free-3D" parallax-based techniques, the Author initiates launching online hosted theme-based festivals which are targeting to explore the present forms of-

(a) individual-being (“Dreams Inside Out”),
(b) the currents of our collective humanity (“Dreaming Upside-Down”),
(c) the new and extraordinary human being internal resources (“Artificial Intellect and Virtual Reality” environment and the ever-evolving spirit and consciousness).

With such festivals the Author aspires to facilitate the divine impulse to shift “self-healing through self-entreating” practices, audiovisual stimulating programs and training which are aiming to “shape” collective consciousness and to co-create our culture and nature that lead our present to the awaiting future modelling benefits-gaining.
As planned by the Author all these festivals are not to be commercial but award-wining oriented. The Author is in gratitude for the partnership with all participating private individuals and organizations and business entities that have or will join the Author’s mission.

Since 2015 the Author has consciously not taken any active initiative to publicize his “Dimana$U$ Prophecy” Project work-in-progress efforts via mass media and PR-channels; however, he is ready to cooperate and participate in special topic-related events that may help his projects’ self-promoting via “person-2-person” invitations and contacts. The Author’s effort belongs to all categories of creative people and ideas-creators, viewers, organizations and institutions who would like to join his project developing team and to share and enable his effort for the collective evolution.
In keeping with his mission and philosophy, the Author believes in his communities networking playing the role of a facilitator with its offerings and passes on 100% of financing/crowd-finding generated directly to the creative people, producers or distributors. The Author believes in his communities networking self-enabling all ideas-creators and producers and distributors who are willing to become part of his communities and mission, to succeed with bringing to life their own ideas per their preference.


To furnish the request of virtual reality alternative, called “virtual emulated reality” that in particular, is used for dream-modelling, the Author will offer a new revenue generation opportunity via the “Dimana$U$ Prophecy” network venue.

As far as in the modern world of permanent “homosexuality & transgender  tendency” arousal the  question “is it really boy or a girl?” is no any longer mono-semantically answered and the relationship between biology and sexual orientation is still “a big issue”, subject of research, the Author proposes to the prospective audience his own theory that is addressed to his discovery of brain-game phenomenon (artifact) of Bi-Visual Fluctuations Perception and brain-game “right & left hemispheres brain-waves synchronicity interaction conflicting” phenomena; and he hypothesizes that a cause of the specific neurons activity, called “virtual mirroring”,  is very likely to be recognized as a fundamental factor that determines sexual orientation.

The Author, by taking in account that his so called “Homosexuality Apophasis & Homophobia Apanage” theory (abbreviated as “Ha-Ha Theory”) has already been reflected  in his not-yet published “Dimanasus Prophecy” novelette, had decided to enrich it with his hypothetical futurology modeling assumptive theory (or else called “prophecy”), titled  as “Gen-Era: Gen-der Sex Mixer” (note: “der” is a shortening of  “Dereliction” and “Derailing”), to be logically integrated into a plot of each screenplay adaptation which his audiovisual products, subjects to producing and investing, are based upon.  Such integration of the Author’s theories together with his ideas behind them woven in a story-telling harmonizes and makes logically compatible all his spin-off stories, be adaptations for either film with animated cartoon episode or animated cartoon, or TV-series of each of them.

The above-mentioned “futurology modeling” theory, abbreviated as “Gen-Era G.S.M.” ,forms the basis of the Author’s concept of associative cognitive mnemo-technique visualization, that he calls “Gender Reveal Demo-Graphics Ops Opt” and addresses to the social phenomenon of people’ role-playing and masks-wearing mimicry. To be applied in creating audiovisual products mentioned above such associative visualization is to be used for characters’ acting and representing in the scenes of animation (animated cartoon).

The Author uses so called puzzling illustration conceptual approach, which exploits the easily-recognizable symbols of homosexuality (rainbow colors) and gender-revealing (red/pink and blue/cyan colors), to give so called “whole-story-mystery-revealing” hints and keys to the viewers. According to his concept, the animated characters are not “actually-acting” and “role-playing” cast or key-personages but “objects”, which are to be deliberately associated with such. Thus, for instance, in some scenes of demo-clips or video-animations presented at YouTube the appearance of “rainbow-painted plastic ball” (protagonist) and “red-cyan” painted plastic ball (antagonist) is a simplified pictorial and symbolic visualization  of “gender (sex) revealing” (by tossing them, they may explode into rainbow, blue or pink dust or splashes or  spray or something else).

Together with this the Author also uses the object of green-colored Pokémon-looking-like helium-filled balloon that serves as a symbolic interpretation of “finding solution for homosexuality and transgender tolerance”. At the same time Halloween-themed “wizard or witch” visualizations of “the sorting hat” and  “rabbit popping-up hat”, normally attributed to the illusionist’s performance, symbolize “Homophobia Apanage and Apophasis”, which are to be accurately and correctly understood and associated with, from one side: “twins studies” that received a number of criticisms including self-selection bias where homosexuals with gay siblings were more likely to volunteer for blood-testing based studies;  and with, from the second side: “twins studies” that have been gotten a special interest of Dr. Josef Mengele , nicknamed as “Beppo”, who was a Nazi doctor performing experiments on prisoners in Auschwitz (Krakow, Poland) during World War II.

Remarkable that the Author  has been studying a lot of materials concerning the “true or false” events of World War II and in particular, Dr.Josef Mengele’s murderously sadistic activity in Auschwitz. In 2005 the Author visited Krakow and had been accompanied by private excursion being held in Auschwitz.  Thus one of “Dimanasus Prophecy” characters, namely the grandfather of “Dimanasus”, is a prototype of Soviet intelligence officer who, during World War II, had been serving as a spy for ABWER, the organization of the Nazi Military Intelligence; and who was clairvoyant having the ability to foresee the future with high accuracy. The grandfather of “Dimanasus” has began writing a book called the "Book of World History”; and he has been using his clairvoyant -gift to be more effective and succeeding in his intelligence operation, which, being linked to the high official meeting among Stalin, Churchill and Truman in 1947 on which Stalin proposed to divide the territory of the Moon for USA-UK-USSR patronage, is supposed to be reflected in a plot as so called “forbidden history” spin-off story.

A few themes of FORBIDDEN HISTORY STORIES (“Moon Other Side” and “Conspiracy Global Espionage Paranoia) together with the Author’s theoretical prophecy, called “Apocalypse Paranoia Apophis Prophecy”, are to be used to the best effect for being screen-played and integrated, in harmony with, into a plot. Thus, in particular, the story of Dr. Josef Mengele, who also had became known as the “Angel of Death”, has something, metaphorically and allegorically, in common with “Apocalypse Paranoia Apophis Prophecy” that “foresees” city of Los Angeles to suffer complete annihilation, as the Apophis-asteroid carves out a gorge in California’s surface in April 13, 2036 (according to some scientific calculations) where Los Angeles is located within.


Sleep Therapy Experimental Project Scientific Research, abbreviated as “STEP-RESEARCH”, is an educational research program aiming to perform safe and perfectly controlled experiments with volunteers’ enrollment, which are addressing to evidence and scientifically prove the high efficiency of “SELF-HYPNOSIS MEDITATIVE SLEEP-THERAPY” practice that serves to prevent (prophylactics) and positively influence, at extended degree, on curing the wide range of mental disorders, psychological and sleep deprivations as well as, supposed very likely, to help rehabilitating and healing cardiovascular diseases.

The basic objective of “DOSAVET” Project is to conduct experimental educational (scientific) research and perform safe and perfectly controlled experiments with volunteers’ enrollment  which are aimed to evidence the high efficiency of “Doubled Objects Stereo Abstracted Vision Entertainment Therapy” practice, based on exploiting the Author’s theoretical discoveries, “know-how” inventions and developments,  to serve as the alternative for brain-controlling conditioned on rapid activation of brain-waves in desired patterns and/or suppression neurons activity that causes negative influence in targeting zones of cortex. The range of such brain-waves may vary from epsilon and ultra-low (alpha, beta, delta, etc.) to high andultrahigh frequencies.

If you wish to contribute to and participate in the Project by joining us on our mission as an organization or business entity, please CONTACT US.

If you wish to become part of the Author’s  team and to help developing the Project or at least one of its sub-projects for your choice,  and to assist with arranging experimental animations  online festival(s), please CONTACT THE AUTHOR.

If you would like to get non-standard and creatively-approached services in IT-sector, please CONTACT VDA PRODUCTION team.